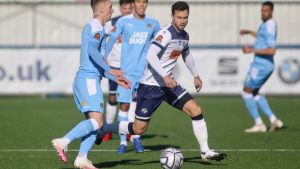 18 days without a game, the Hawks got back in action today and so very nearly came out on top against high-flying Notts County in the Fifth Round of the FA Trophy.

After going behind inside the 15 minutes through Matt Wolfe, the hosts completed the comeback just after the restart following goals from Tommy Wright and Bedsente Gomis. County levelled proceedings again from the spot after Nico Jones fouled his man and saw red.

Despite Tyreace Palmer’s late dismissal, the result would be decided by penalty kicks. Notts County were the team to prevail scoring four of their five penalties, booking their place in the next round in the process.

The game had a quick tempo to it early on, but County didn’t take long to take control of possession and once they did, they punished the Hawks. Jimmy Knowles did well to get away from debutant Nico Jones before pulling the ball back to Matty Wolfe who did the rest from 6 yards out.

The Magpies almost doubled their lead following a quick counter on 20 minutes when they caught the home side out from a corner. Calvin Miller and Jordan Barnett worked the ball to get away from the covering defender, but back came Roarie Deacon to make a last ditch block to keep the scores the same.

The visitors continued to look dangerous and again took aim at Joe Tupper in the Havant goal. Adam Chicksen cut in from the left before curling an effort that looked destined for the top corner only for it to be marginally wide of the target.

Notts were made to rue those missed chances as the Hawks were back level on 34 minutes through Tommy Wright, when a quickly taken free-kick from Billy Clifford set him loose in the area. He beat his man and finished neatly at the near post to level up proceedings.

The Hawks took the lead shortly after the restart when Bedsente Gomis rose highest to flick a Josh Taylor corner into the net at the near post.

Billy Clifford looked to be enjoying himself out there and almost pulled out a goal of the season contender moments later. A brilliant one-two with Deacon allowed him to get away from his man following a throw-in before firing an effort towards goal which flew just wide.

The match took a turn on 70 minutes when Nico Jones pulled down his man in the area. Referee Sunny Gill didn’t hesitate and pointed to the spot before showing Jones a straight red card. Knowles dispatched the penalty kick to draw the away side back on terms.

It wasn’t long before the Magpies numerical advantage disappeared as substitute Tyreace Palmer was shown a second yellow card for a late tackle on Tupper.

Both teams had opportunities to win the tie inside second-half stoppage time but neither team could find the net which meant it would be decided by penalty kicks.

The visitors came out on top and progressed to the Quarter-Finals of the FA Trophy after winning 4-2 on penalties.

The Hawks will be feel aggrieved to have lost but plenty of positives they can take into their League campaign when they get back to it on Tuesday night away to Hemel Hempstead.