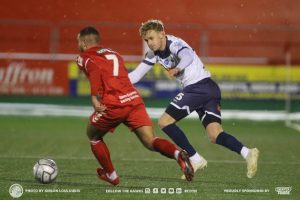 The Hawks remain without a victory since January 2nd after Hemel Hempstead won 2-0 at Vauxhall Road.

The visitors would have felt confident heading into today’s game following a valiant display against National League side Notts County at the weekend. But in the end, they struggled to muster anything in front of goal that would cause Hemel problems making it a fairly comfortable day at the office for the home side.

Goals from Bernard Christie and Reggie Young either side of the break did the job for Lee Bircham’s men who completed the league double over the Hawks for the first time since the 2015/2016 campaign.

Hemel had the first real chance on 11 minutes when Lacey played in Reggie Young through on goal. The winger looked to have beaten Joe Tupper, but his low effort was cleared off the line by a backtracking Nico Jones.

Captain Sam Mantom created the opening goal of the game when his pull back was tapped in by Bernard Christie on 13 minutes.

The Tudors almost doubled their lead on the stroke of half-time when Christie latched onto a long ball forward. He drilled the ball across the face of goal and Craig Robson stuck a leg out, inadvertently sending the ball goal-wards drawing a top-drawer save from Tupper.

The lead was doubled soon after restart when Christie got in behind the Hawks defence again. Sam Magri slid across to push the striker wide enough to prevent a shot on goal, so instead he opted to tee up Young who finished into an empty net

The away side did react well and came close to pulling a goal back when substitute Joe Iaciofano took the ball under his spell to get into the area. But the ball got stuck under his feet which allowed Hemel defenders to get back and crowd him out.

Doswell’s side did manage to get a shot on target with just over 20 minutes to play when Danny Kedwell tested Nick Hayes from 10 yards, following a Tommy Wright pullback.

It looked for all the world the three points would be wrapped up for Hemel when Samir Carruthers raced one on one with Tupper late on. The midfielder tried audaciously scooping the ball over Tupper only for it to dribble wide of the target.

The Hawks stay in 9th place, nine points adrift of the play-off places. Ebbsfleet are up next as they travel to the Draper Tools Community Stadium on Saturday.